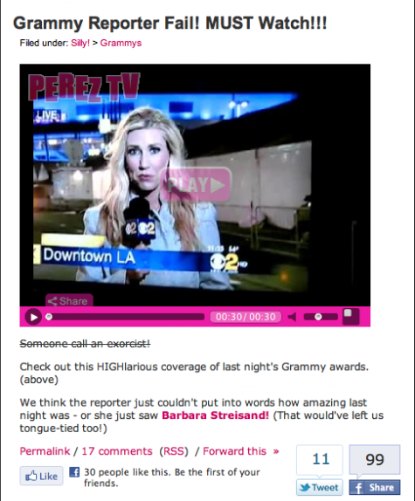 This is just sad! Los Angeles reporter Serene Branson was on the scene last night at the Staples Center when she appeared to be flubbing her words for her Grammys highlights. Upon closer inspection, it appears that the reporter was having a stroke.

In true douche-like fashion, idiot blogger Perez Hilton decided to trash her for her on air mess up. Holy crap, I really don’t have the words for this douchebaggery! For your sake, I will find some.

Perez, being the epic douche that he is, has a certain knack for displaying his idiocy for his millions of readers. DISPLAYING IT! We first took notice when this idiot tried to call BS on reports of Michael Jackson’s failing health the day he died. He said that MJ was faking it because he wanted to get out of his 50 tour dates at the O2.

Then, he rode the coattails of the Anti-Bullying campaign, even though he’s the biggest bully ever known to exist. Then this tool went on Ellen DeGeneres’ show to say that he would stop with the bullying and be kinder to people on his website.

And now this?!?? This poor woman had a STROKE on LIVE TELEVISION. HIGHLARIOUS? WTF DOUCHE?