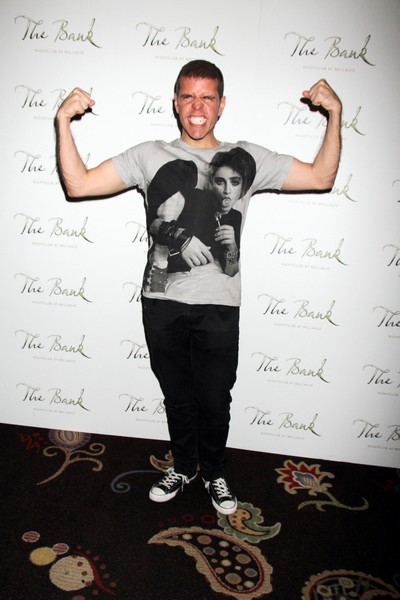 Perez Hilton is not only an ass!?*!$ but he is an hypocritical ass!?*!$.  A year ago Perez, whose real name is Mario Armando Lavandeira, Jr, came out guns ablazing against bullying.  At that time there was lots of buzz surrounding the death of Rutgers student Tyler Clementi, who committed suicide after being the victim of cyberbullying.

Perez’ goal was to look like a good guy and garner more publicity for himself which is all that the lowlife cares about. So he told Ellen DeGeneres.  “I’m going to do things differently on my website than I have in the past. I’m not going to call people nasty nicknames. I’m not going to go the mean route. I’m going to force myself to be funnier or smarter.  I don’t want to be a bully. I don’t want to be called a bully,” Hilton said at the time in a video on his site.

Well it’s a year later and Perez has apparently forgotten his phony vows.  Now he’s back to being the sensationalist pig he always truly was – as we see from his headline yesterday:

‘Oh No! Is Lindsay Cutting???‘  In this post Perez mercilessly assaults Lindsay Lohan with baseless accusations of being a ‘cutter’ – all based upon his exaggerated interpretation of a photograph.

Perez uses a picture of Lindsay from a Paris Fashion Week event and draws an arrow pointing to what he calls a ‘disturbing image’ of a ‘fresh scar’ on the star’s left arm.

What’s going on is that Perez is once again spewing vicious garbage at a target who can’t really fight back – and he is doing it in order to increase his traffic on his blog and therefore his income. He is behaving like the ultimate cyber bully.

Perez continues: “Honey, what is wrong with you? Why aren’t you getting any better? Why are you still the hottest mess of the Western Hemisphere? What’s it going to take to get you back on the right track???”

Certainly Lindsay’s getting back on the right track will not be assisted by Perez Hilton.

Lindsay reported to Gossip Cop that Perez is totally wrong about his allegations that she is a cutter saying: “That’s Crazy.”