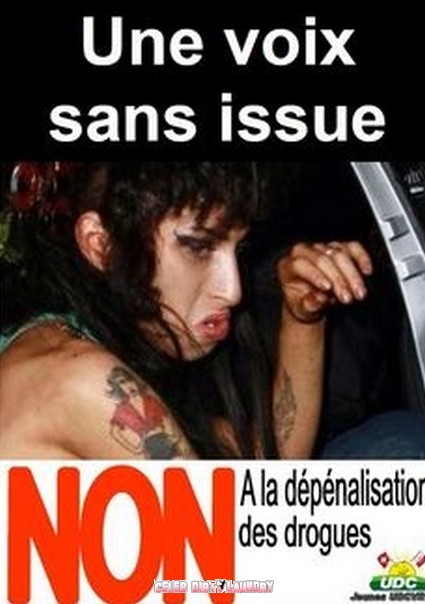 The Swiss People’s Party are using a photograph of Amy Winehouse looking drunk and stoned alongside a slogan which says “No – to the decriminalization of drugs.”  It is thought that so far the poster is only viewable online, but that hasn’t stopped Amy’s army of fans from branding it distasteful.

Gregory Logean, the president of the party, responded to the criticisms: “The death of Amy Winehouse put a sad reality before our eyes that other parties often forget – the harmful effects of drug consumption. It is not our methods which are shocking – it is reality. We are displaying a photo that the whole world already knows. Winehouse was known not only for her songs, but above all for her drug excesses.”

Amy’s families position on this is unknown – her father Mitch has made his opinion on drug usage known, and is currently setting up The Amy Winehouse Foundation to help other addicts to recover whilst also speaking to Parliament about the lack of useful support for those with addictions.

It comes as the news breaks that in Switzerland, the ruling Liberal Democrats are moving to legalize personal drug use, and want to offer treatments and rehab rather than prison sentences and criminal records.

The impact that tragic drug and alcohol abuse deaths have on family and friends has been made apparent by Amy’s passing – Amy’s family have left the country to grieve in private, after thanking the army of fans who congregated outside her Camden house and left thousands of tributes, and Amy’s boyfriend Reg Travis is said to be struggling with her sudden death. Her ex-husband Blake Civil-Fielder has also spoken of his intense grief.

The Swiss People’s Party doesn’t seem likely to remove the singer from their campaign anytime soon. The irony is that the poster of Amy can be used by opposing sides in the debate about legalizing, or at least decriminalizing, drugs.