Pippa Middleton On Skates – Is There A Hockey Player In Her Future? 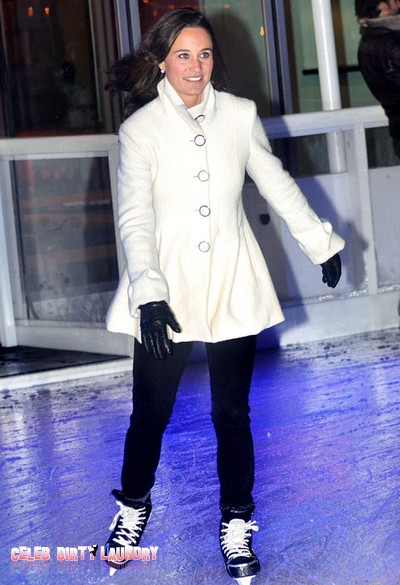 Kate Middleton‘s little sister Pippa Middleton is now officially single and skating! Pippa was not wearing delicate figure skates but rather clutzy-looking hockey skates as she skated across the rink at the launch of Tiffany & Co. presents Skate at Somerset House in London. Now that Pippa and former boyfriend Alex Loudon have called it quits could athletic Pippa have some lucky NHL hockey player in mind for her next man?

28-year-old Pippa and Alex broke off earlier this month after ugly rows, as we reported, but the Royal sister-in-law looked at ease in a short white coat, black jeans, and leather gloves as she skated with a group of girlfriends. Skating take practice often landing the uninitiated on the butts. Pippa successfully remained on her feet however as she avoided taking any unexpected slips or tumbles.

It seems that Pippa and Alex broke it off primarily over the clash between Pippa’s desire to be in the limelight and Alex and his family’s more conservative and reserved manner. It turned out that the Loudon’s thought Pippa too trashy for Alex!

A friend of Pippa’s said earlier: “Alex’s parents were welcoming but they were always somewhat lukewarm about the relationship. They didn’t see Pippa as ‘wife material.’ James and his wife Jane both come from very good families. But if Pippa’s sister Kate is good enough for the Royal Family of Britain, good enough to be the mother of future kings and queens, then mustn’t Pippa be good enough for Alex?

In any case, imagine if Pippa hooks up with a brawling bruising NHL player – would the British Royal Family allow such a travesty?