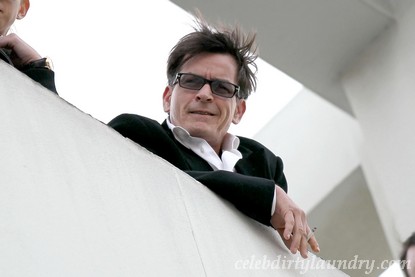 Cops received a call earlier today, prompting them to plan a raid on Charlie Sheen’s house. Someone alerted the police that Charlie threatened to harm himself with a firearm.

Under the restraining order obtained by Brooke Mueller, Charlie is not allowed to have possession of firearms. Police are concerned, but there are no current plans to place the actor on a 5150 psychiatric hold.

The police are searching the house now, but have found Charlie and the goddesses sitting around munching on some hamburgers. TMZ has more:

Cops are inside the house right now, searching for firearms and ammunition. And law enforcement tell us cops are not trying to place Charlie on a 5150 psychiatric hold. Charlie and others in the house are at the dining room table eating hamburgers.

We are told the LAPD has been conducting several investigations involving Charlie, including the possible violation of the TRO.

Update: It looks like all is well at the Sober Valley Lodge. Charlie tweeted, “#fastball: all good here on homefront. all reports are false. I’ll explain more very soon. #Dogspeed c” and this message, “#fastball; the LAPD were AWESOME. Absolute pros! they can protect and serve this Warlock anytime!!! c”.