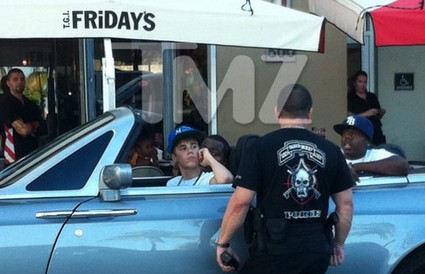 Justin Bieber, 17, and his pal Sean Kingston, 21, were driving around Miami in Sean’s baby blue convertible Rolls Royce when fans recognized them.    The two stars were just trying to enjoy cruising when they were recognized by fans.  The fans proceeded to surround the car and Justin and Sean feared for their lives.    The two were driving on Ocean Drive in Miami when it all went down.

TMZ has the scoop: We’re told Justin and Sean got the attention of a plain-clothes officer who stood guard until the crowd left. Sources tell TMZ the sick Rolls actually belongs to Kingston, who — for some reason — is cool with his 17-year-old pal taking the wheel.  By the way, it all went down in front of a TGI Friday’s restaurant.

If your Justin Bieber it is not safe for you to take a drive in a car without your bodyguard.  BUT, if you are Justin Bieber and you are driving in a baby blue convertible Rolls Royce with the top down on the main drag of Miami, you have to think that perhaps the Biebs wanted a little attention.  What do you think?  Let us know in the comments below!