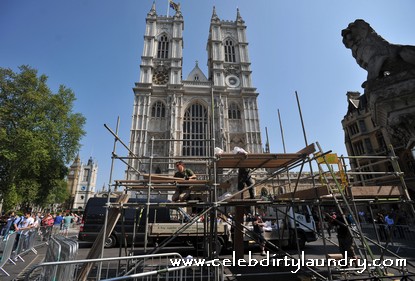 Preparations are really underway for the Royal Wedding of Prince William and Kate Middleton.  Pictured above is scaffolding erected for the press near Buckingham Palace as preparations are ongoing for the Royal Wedding April 29th, 2011 of Prince William and Kate Middleton in Central London. London, England.  We also have pictures below taken by tourists of the official schedule at Westminster Abbey announcing the ‘Wedding’ for April 29th, 2011.

As flocks of tourists come to the city in preparation for the Royal Wedding souvenir shops are making a swift business with William and Kate memorabilia.  Meanwhile, Scotland Yard’s mounted police branch is putting its ceremonial division, known as the Grey Escort, through its paces as officers prepare for the royal wedding.  The force said in a statement Tuesday that the horses would be chosen for their “good and calm temperament.” Will you be watching the wedding Friday?  I am undecided it means getting up at 4AM to see it and I am not sure yet?  I probably will :-)