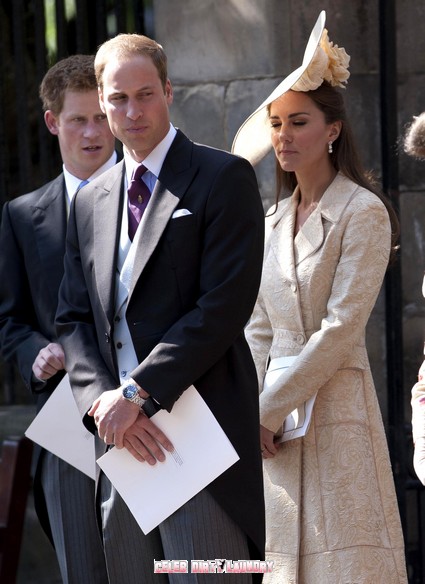 The Duke and Duchess of Cambridge Prince William and Kate Middleton and  Royal brother Prince Harry attend the wedding of Zara Phillips to Mike Tindall at the Canongate Kirk on Edinburgh’s historic Royal Mile.   Zara , the daughter of Princess Anne, the Princess Royal – Queen Elizabeth II’s only daughter – wore a stunning ivory gown by designer Stewart Parvin and her “something borrowed” was the Greek Key diamond tiara, once owned by Princess Alice of Battenburg, the mother of Queen Elizabeth’s husband, Prince Phillip, the Duke of Edinburgh.

This is the first event the Royal couple have attended since their North American tour.  Kate made no attempt to upstage the new bride and even wore in 2006 at Laura Parker Bowles’ wedding. She matched the beautifully-textured cream-colored coat, with a hat and pumps.  Kate and William looked very happy to let Zara and Mike have the spotlight for the day.

The wedding was not on the scale of Prince William and Kate but the couple still followed in the tradition by giving onlookers what they were after with a public embrace outside the Canongate Kirk in Edinburgh.

Congrats to Zara and Mike!

Click on the thumbnails below to enlarge more pics of the Royal couple!