BY Shannon Rose on March 5, 2011 | Comments: one comment
Related : Wrestling 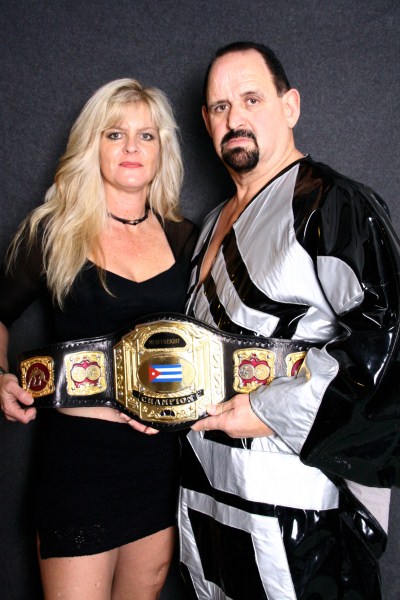 Wrestling legend Fidel Sierra, with his manager Fantasy, has been a force to reckon with in the world of professional wrestling.  Together they have won numerous championship titles in multiple wrestling companies and took on legends of the squared circle. Now, they take on the world as entrepreneurs.

Over his 30-year career in the ring, Sierra has gone to battle with such pro wrestling great  as Hulk Hogan, Ric Flair, the late “Mr. Perfect” Curt Hennig, The Rock and “Stone Cold” Steve Austin.

With Fantasy by his side, there isn’t anything Fidel Sierra can’t do!  And if you think Fantasy is like other female managers who just sit outside the ring and cheer, THINK AGAIN; she has no problem getting “hands on” to help her man win.

Today Fidel Sierra and Fantasy can be seen wrestling in the Florida Underground every Tuesday at Gasoline Alley in Largo, Florida.

But Fidel Sierra and Fantasy have decided to take on another challenge outside the ring: that of entrepreneurs.

Sierra and Fantasy opened up a restaurant in the Tampa Bay area called “Crazy Dave’s Sports Bar” which has become a hotspot to tourists and locals, as well as top celebrities and sports athletes, including other professional wrestlers.

The bar is packed full of good food and good friends, all of which make for a great night out.  It has something for everyone: contests; games; pool; leagues; and don’t forget—beautiful women!

It’s also the home of the famous “9-inch Cuban Sandwich.”

For a great night out and the chance to mingle with a legend of professional wrestling, come visit Crazy Dave’s Sports Bar!