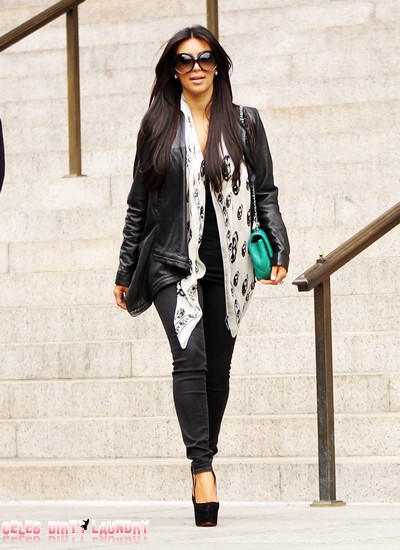 Kim Kardashian‘s former publicist, Jonathan Jaxson, has made statements to the New York Post that imply that he believes that Kim’s wedding to Kris Humphries was staged and possibly even fake – telling the NYP “she knew weeks before getting married she didn’t want to do it.” Are we surprised at these revelations? Not one bit – everything about the Kardashian sisters and their monster-mom-manager Kris Jenner is fake… except their greed and their promiscuity.

While talking on the ‘The Elvis Duran Morning Show’, the publicist also revealed that he had “staged” a number of media stunts for Kardashian while she was his client.

Jaxson, who worked with the 31-year-old TV personality from 2007 to 2009 called Kim a master of media manipulation.

“She knew weeks before getting married she didn’t want to do it,” the NYP quoted him as saying.

“She’s never gotten over ex Reggie Bush,” he said.  “I staged several of the moments that the world has seen of her, such as a ring that we alleged was from Reggie Bush,” Jaxson said.

“It was December 26, 2007 – I remember the day. She was going to go shopping with her grandmother and her mom and we said, ‘Let’s do something to get more press for you.’ She said, ‘Perfect. Let me go to a ring store and walk out as if Reggie Bush were proposing to me, I have ring I love and adore-it’s seven carats. I’ll keep it in my purse.’  It was calculated to a T and then it was leaked to a magazine,” he added.

Was Kim Kardashian’s wedding to Kris Humphries ‘fake’ in the sense that it was primarily for profit and publicity – you be the judge.