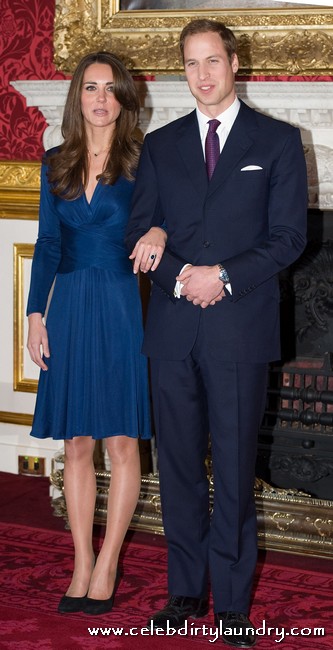 The Queen has given her formal consent to Prince William’s forthcoming marriage to Kate Middleton.  Her Majesty, who celebrated her 85th birthday today, signed an elaborate state document giving her approval to William and Kate’s wedding so the marriage would be valid.

In it the monarch gives permission to the union of “Our Most Dearly Beloved Grandson Prince William Arthur Philip Louis of Wales, K.G. and Our Trusty and Well-beloved Catherine Elizabeth Middleton”.

Under a law dating back to the 18th century, all descendants of George II must obtain the sovereign’s agreement before they wed.
Typed in calligraphy, the notice is tied by gold braiding to the wax Great Seal of the Realm, a seal used to symbolise the monarch’s approval of important state documents.  The “Instrument of Consent” features the couple’s initials entwined in gold beneath the prince’s coronet, but St James’s Palace said this was not the couple’s official symbol.

The Queen’s signature “Elizabeth R” is at the top right of the document, which is dated “the ninth day of February Two Thousand and Eleven in the Sixtieth year of Our Reign”. It was signed by the Queen herself, signed with her own hand at a Privy Council meeting after the monarch made a formal Declaration of Consent. The Queen celebrated her birthday by attending the traditional Royal Maundy Service at Westminster Abbey where her grandson will marry next Friday.

The Queen presented the elderly with Maundy money, a practice on the Thursday of Holy Week which dates back centuries.