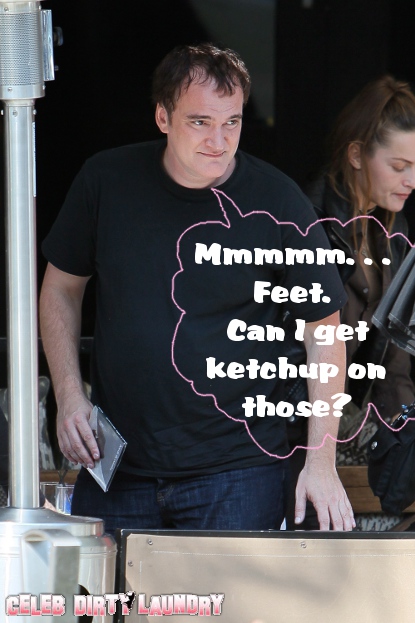 Does it shock you to learn that director extraordinaire Quentin Tarantino LOVES feet? Let’s be honest, the guy is as quirky as they come, so it seems only logical that he’d have a foot fetish, right? Yuck!

An e-mail sent out earlier this month by a woman in the film/tv industry has leaked and confirms — in great detail — that Quentin’s once-secret,  disgusting (well, apparently other people don’t view it as such HA) love is as real as the Oscar sitting on his shelf.

In the e-mail, the woman tells how she met and made out with Quentin at a party. Eventually, he lured her into his creepy-Tarantino lair where he asked THE QUESTION: “Can I suck on your toes while I . . . [sexual act you don’t need littering your mind on a nice afternoon such as this]”

The e-mail goes on and on, elaborating and commenting extensively on the nature/appearance of Quentin’s private region. I won’t tell you what she said. Just know that she wasn’t thrilled with what he presented her with.

Now, it really all comes down to this one question: Is this story real or fake? What do you think? Do you think this is just some woman who’s out to get Quentin? Or do you think he has a legitimate case of the Toe-Loves?