Reese Witherspoon Claims Making Out with Robert Pattinson Is Unpleasant 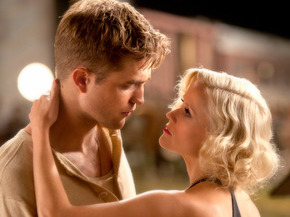 Newlywed Reese Witherspoon was spotted out for dinner last night with her hubby, Jim Toth. The 35-year-old actress recently talked to MTV about what it was like filming love scenes with co-star Robert Pattinson in their upcoming film, Water For Elephants.

“ He had a very runny nose. It wasn’t appealing. It wasn’t pleasant,” Reese said. When asked for her advice when prepping to film with Robert she said, “ Bring a Sudafed”.  Poor RPattz! Even he’ s allowed do get sick – and is she really complaining?

Last month, the Twilight heartthrob admitted that he had a really bad cold during the love scene filming. He went as far as saying that he wiped his runny nose on Reese’s wig!   Can I have that wig please?  TOTALLY kidding!!!!