Reese Witherspoon Looking Casual Out and About In Brentwood 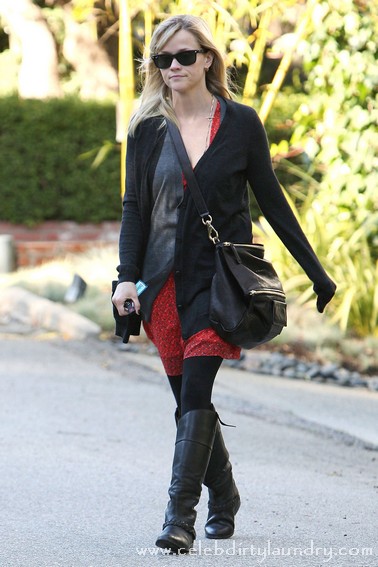 Reese Witherspoon, 34, who became engaged in late December 2010 to her boyfriend talent agent Jim Toth was spotted out and about in Brentwood, California February 2nd, 2011 wearing black boots and a red speckled dress.  Over the weekend Reese was spotted with Jim and her two children Ava, 11,  and Deacon, 7,  going to church in Santa Monica, CA.

Reese is currently staring in How Do You Know – in the movie Lisa (Reese) after being cut from the USA softball team and feeling a bit past her prime, Lisa finds herself evaluating her life and in the middle of a love triangle, as a corporate guy in crisis competes with her current, baseball-playing beau. (Owen Wilson and Paul Rudd)  When asked what it was like working with Owen and Paul Reese replied:  “It is a tough job ladies but someone has to do it”