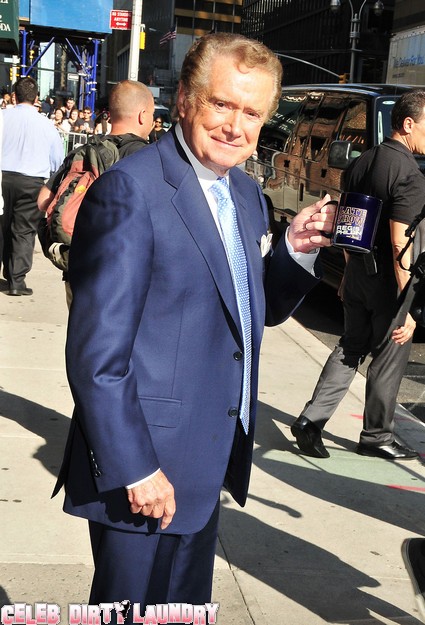 It seems everybody and her sisters are in some sort of reality show these days – in fact check your home carefully for any hidden cameras… . Now Regis Philbin is hoping to come out of retirement and to step right into reality TV.

Regis Philbin quit “Live with Regis and Kelly” in November amidst fierce contract disputes in November and the 80-year-old comedian is “in talks” regarding some new projects and is interested in doing a reality show.

“There are several things that interest me. You know these reality shows? I would love to do a real reality show where Regis goes out,” he revealed on the Wednesday (September 7) episode of the “Live” show, before adding, “I did a little pilot for somebody last week in L.A.”

Philbin said that pilot revolved around his visiting an eye doctor for floaters in his eyes. “So they took the camera up, and when (the doctor) would leave the room, I’d say, ‘This is ridiculous! Why can’t they give me a pill or a shot to get rid of this!?’ Then I went to do Craig Ferguson and whatever happened, happened.”

While he is awaiting the edited version before deciding if he will fully commit to the show or not, Philbin has already had a name for it. “This Week With Regis!” he gushed, “You like that?” However, he would take some more time off before jumping on a new project, claiming, “That’s why I haven’t made the decision yet.”

Regis also said that he was also offered to do a sitcom, but he is not interested because “it’s so time-consuming.”

Well Regis is 80 years-old so perhaps a full-time filming schedule might be a bit much. But as far as it seems Regis is still sharp and in good shape.