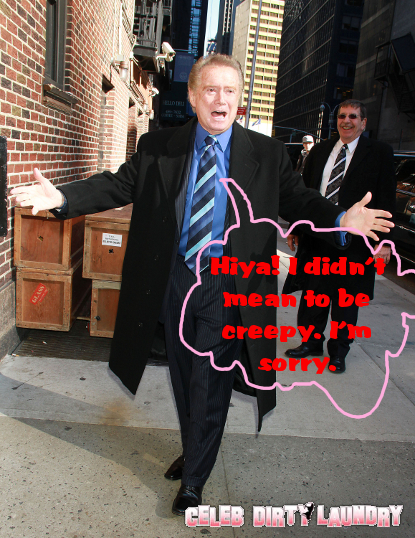 Regis Philbin has officially entered Creepyland with a comment he made to Kelly recently during a taping of Live. I mean, I don’t think we need to call the cops or anything . . . but it was definitely borderline awkward — and kind of funny. We’ll let you judge his level of creepiness from the video below.

After drooling over pictures of Rosie Huntington-Whitely and stopping for and over-the-top amount of time to picture Jennifer Lawrence, X-Men: First Class star, during her nude make-up sessions, you’d think Kelly would be getting slightly used to Regis’s unusual behavior. Perhaps not. Because I think this one legitimately creep-i-fied her out. HAHA.

It’s okay, Reg. I think everyone still borderline loves ya’. Just keep the creepy/awkward comments and blatant mid-show fantasies to a minimum. Thanks, CDL.