Regis Philbin Now Admits He Was Booted Off LIVE! with Regis & Kelly 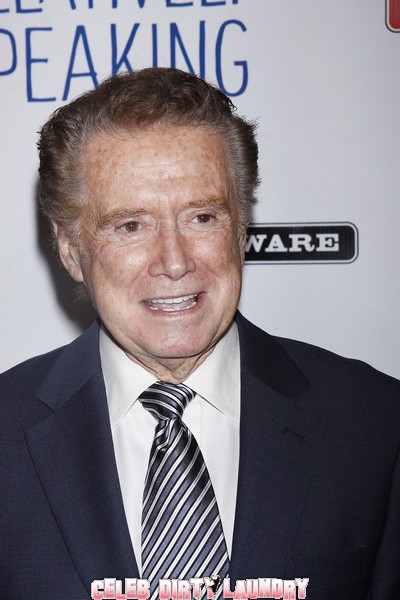 Regis Philbin has come clean with what we feared was true back when he announced that he was leaving ‘Live! with Regis and Kelly.  Although he will be on until November 18, it was back in January that Regis made public that he wouldn’t be returning to ‘LIVE! with Regis and Kelly’ – but didn’t say exactly why.  Still, he fired his agent immediately after… .

“The contractual issue just never worked out, but I was going to leave before that anyway,” Regis told The Mojo in the Morning radio show according to Radaronline.

“That’s a loss on their part because I’ve got to admit, it looks to me like they’re kind of forcing you out and I think it’s a mistake,” the Mojo host Spike said. “The audience still loves you. Your obviously still ready to work so I don’t know why they wouldn’t want you.”

“Of course it’s a big mistake, but Regis is moving on,” Regis said, with typical modesty.

“I don’t want anything lined up yet. I want to have a few moments of peace alone before I get involved with somebody else,” Regis added.

As for who will replace him on the show with Kelly Ripa, Regis says they haven’t chosen anyone yet. His personal front-runners are Kelly’s hubby, Mark Consuelos and Bravo host Andy Cohen – both duds in my book.  “I really don’t know and I know they don’t know.”

“It’s going to be a process of three or four months of her trying out different people, seeing who clicks with her,” Regis admitted.

Regis was the only decent thing about that show – I wouldn’t watch it now unless they get Charlie Sheen to sit with Kelly!