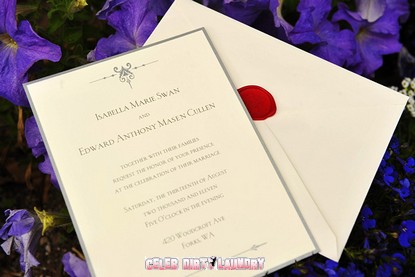 During the pre-show for the 2011 MTV Movie Awards the official Breaking Dawn wedding invitation for Edward Cullen (Robert Pattinson) and Bella Swan (Kristen Stewart)’s wedding was revealed.   Love, love, love the invitation! Outlined in lavender with the Cullen family crest in red wax to seal the envelope it is simple, classy and elegant!

The invitation reads, “Together with their families, [Bella and Edward] request the honor of your presence at the celebration of their marriage.”

The invitation also reveals the date for the wedding which is the 13th of August 2011 at 5:00 PM.  Everyone has been guessing when the wedding would be so to finally have confirmation will be a big deal to Twi-hards (and me).   Check back later and we should have the new trailer that will be seen tonight on the 2011 MTV Movie Awards.    I am a huge Twi-hard and I am soooooo excited.

The Twilight Saga: Breaking Dawn – Part 1 hits theaters November 18, 2011.  Will you be going?  What do you think of the invitation?  Celeb Dirty Laundry wants to know!

Click on the thumbnail’s below to enlarge more views of invitation!