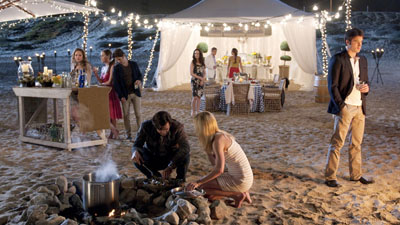 After a long, nearly four week hiatus, ABC’s Revenge is back next week with an all new episode.

“Duress,” the eleventh episode of the new hit TV show, opens with all of the principal characters celebrating Daniel (Joshua Bowman)‘s “clam-bake” themed birthday party on the beach. The celebration doesn’t last long, however, as the camera slowly pans to show Tyler (Ashton Holmes), pointing a gun to Emily (Emily VanCamp)’s head!

Apparently, something has gone terribly wrong for Tyler, who, early on in the episode, blatantly blackmails Conrad Grayson (Henry Czerny) with the flash drive footage he stole from Nolan (Gabriel Mann) in the last episode.

The divorce battle between Conrad and Victoria Grayson (Madeleine Stowe) also seems to be heating up. During a negotiation scene between their lawyers, Victoria’s lawyer states that they will go after her full share of Mr. Grayson’s wealth, claiming that she signed the prenup when she was pregnant with Daniel and, therefore, “under duress.”

The Grayson kids will also play a significant role in the divorce proceedings, with the two parents fighting over custody of teenaged Charlotte Grayson (Christa B. Allen) and Daniel going undercover at his dad’s office to find information to help his mother.

If you can’t wait until next Wednesday, Jan. 4th, go here to watch the first 10 minutes of the episode!