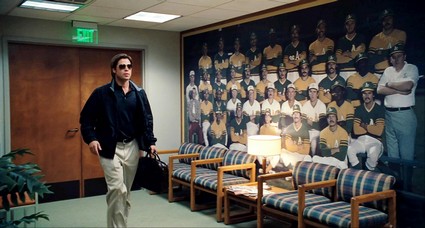 Hollywood sports films often go something like this; a hopeless team of underdogs go through a form of reinvention and prove to the world that they had to goods to succeed all along. Over the course of the story there’s usually a montage of misfit players learning to be better and at some point the entire team dances to an oldie in the locker room. Let’s not forget the obligatory bar fight with the rival team that lands them in prison for a night and the addition of a stale female character that shows up to the game last minute to support her man, be it the coach or the star player.

Weekend film goers rest assure none of these clichéd moments appear in ‘Moneyball’. The film has the difficult task of not drowning in a sea of formulaic baseball movies and convincing audiences that Brad Pitt spends his nights drinking alone, wallowing in regret. It nails the former and though there are moments of “he’s too pretty to be sitting around that dumpy stadium”, Brad Pitt is quite compelling in the role. One thing’s for sure, he plays Billy Beane so similarly to his ‘Ocean’s 11’ character that you half expect the Oakland A’s rob the Bellagio at the end. But is any of that really a bad thing?

The sharp script was penned by Aaron Sorkin, who wrote a little know film called ‘The Social Network’ which apparently had some excellent dialogue. ‘Moneyball’ contains similarly clever discourse with moments that are awkward and witty at the same time. Much of these scenes are carved from the relationship between Beane and Peter, played by an adorably misplaced Johan Hill.  One of the most memorable scenes features Beane recruiting the Yale trained economist to leave his cubicle worker life and aid the construction of a pro team.  Well, he doesn’t actually recruit him but rather ‘buys’ him. Hill is superbly naïve in his finest role yet.

Aside from all of this, there’s a plot too, an awfully good one. Beane is a failed Mets player who chose to become a scout in the midst of a dwindling career. As general manager of the Oakland A’s, he is forced to work with a budget that is a forth the size of the Yankee’s. Determined to change the entire baseball scouting process, Beane takes a whole new approach to putting together a team and as one of the best lines says; “The first man through the wall, always get’s bloody”.

Even for those who find baseball to be a foreign language will appreciate the film’s dynamic approach to the sport. Much of the story is told through old footage, radio sports commentary, and photographs which make for a compelling narrative. Few films have captured the world of baseball in the manner that ‘Moneyball’ does. Much of this stems from director Bennett Miller’s placement of the camera, which is often from the perspective of the players on the field. These artistic choices top off reasons why this touching story is the ‘breaking ball’ of movies this season.