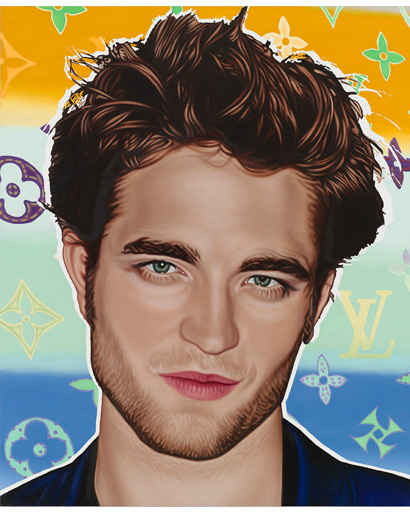 New York City painter Richard Phillips’ paintings of celebrities, including Miley Cyrus,  Kristen Stewart and Robert Pattinson are featured in Elle.  With the portraits Richard Phillips explores the dark recesses of the red carpet moment and talks candidly about his ultra-famous subjects.  The art installation opens at the end of the month, but ELLE.com is running the images today.  Below are a couple of quotes from the article – visit Elle.com to read the rest.

Kristen Stewart – “I think the easiest one right off the bat was Kristen because of her relationship with Pattinson; plus, New Moon and Twilight were such a success. And just at that time she was hitting it big with The Runaways with Dakota Fanning. The Runaways was kind of a great but wasted opportunity, because the film was horribly directed and terribly shot, but their performances isolated from that were great.”

Miley Cyrus – “For sure, Miley Cyrus made sense. To my mind, if there’s Zac, there has to be Miley, being the Disney queen of Hannah Montana fame. A German curator came over and said, ‘I don’t know who any of these people are.’ And it came out that he had a daughter who was nine years old, and I said, ’Let’s take a picture with your phone of you in front of Miley Cyrus and Zac Efron and then I want you to see what she has to say about this.’ She was out of her mind about it.”