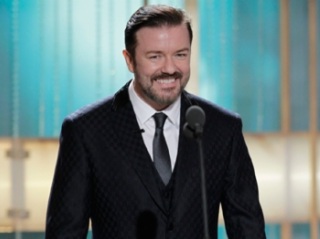 The Golden Globe’s 68th annual show had British comedian Ricky Gervais take the job of hosting the show for the second time – he won’t be asked back a third time.

Gervias appeared to be yanked form the show for a solid hour following an opening monologue that was just plain rude and not at all funny.  Observers speculated that the comic may have been collared backstage and fired.

Gervais opened the live telecast by poking what he considered fun at Tim Allen, Charlie Sheen, Mel Gibson and Robert Downey Jr.   He claimed to have helped Philip Berk, president of the Hollywood Foreign Press Association, off the toilet and ‘put his teeth back in’.   He introduced Bruce Willis as ‘Ashton Kutcher’s dad’ (since his ex-wife Demi Moore is with young Ashton) and explained that Johnny Depp’s critically panned caper movie ‘The Tourist’ had only been nominated because the voters of the Hollywood Foreign Press Association ‘accepted bribes.’    Neither Willis nor Depp appeared amused.

Then Gervais went missing leading to speculation on blogs and Twitter that the host been killed or fired.

Hollywood publicist Lewis Kay wrote ”Did they  (Hollywood Foreign Press Association) fire Gervais midway through the show?’ adding ‘others have joked but I think it’s getting to the point where it may be true.’

When Gervais finally returned he seemed rather subdued, leading to suggestions that he had been taken to task backstage and asked to tone down his routine.  According to CNN host Piers Morgan, Gervais looked ‘haunted’ He vowed to ask the comedian: “What the hell did they do to you backstage?”

Tim Allen, Tom Hanks and Robert Downey Jr. all appeared to be at least mildly uncomfortable with Gervais’s performance. ‘It’s one thing if it’s just the people in the room, but on a broadcast it makes you feel bad for some of the people,’ said Richard D. Zanuck, producer of the Globe-nominated Alice in Wonderland. ‘I know it’s what some people want, but I still feel bad.’

The New York Times wrote ‘It was Mr Gervais’s second chance to host the Golden Globes; he may not get a third.’

With all of the talented people available why would they choose someone like Gervais?