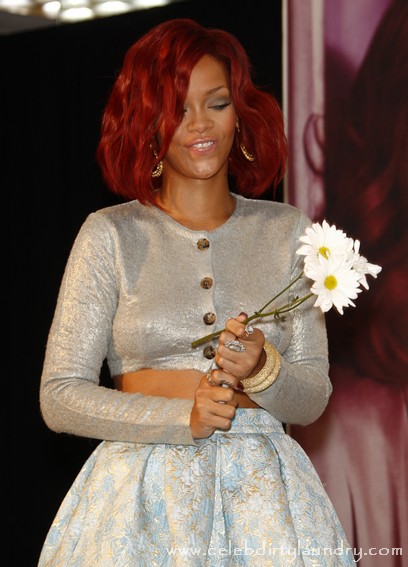 Rihanna, whose explicit video for her new track S&M has been banned in 11 countries, went on a sex store shopping spree in Australia yesterday.

The 23-year-old exotic beauty is in Australia as part of her Last Girl On Earth tour and is rumored to be performing at Sydney’s gay and lesbian Mardi Gras festival tomorrow.  Rihanna — who is famous for her flesh-flashing stage outfits and revealing fashion choices — recently claimed girls who attack her for her provocative look are “hypocrites”.

“People think I’m overly sexy.  It bothers them for some reason,” she said. “Girls don’t like to see other girls dressed sexy.  It’s a little intimidating, I don’t mean that in a cocky way.  There’s always going to be somebody not liking what you do.  “People have a lot of crazy opinions on things.  Things I say, things I wear, places I go.  It’s just stupid. It’s bulls**t.   I’m a young human being. It’s fine for me to go to a club.  “People are hypocrites. They can’t wait to say something horrible.  Most of them are unhappy with themselves.  It’s women who are mad at other women.  They should take a look at their own lives.  A lot of people don’t have the guts to confront themselves.”

Sure Rihanna – but a lot of people think that using blatantly sexual videos that bordering on, and even enter the realm of pornography, do not enhance your music or your image.