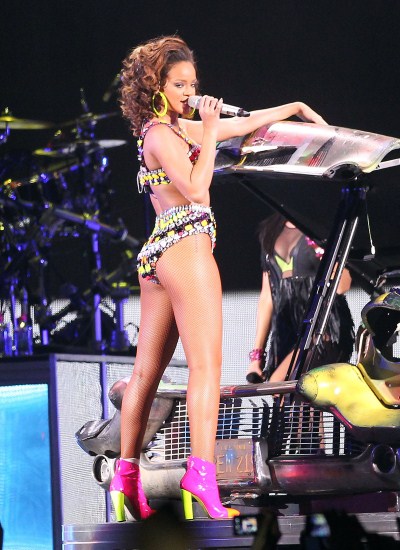 Rihanna was forced to cancel a second show in Sweden last night and her doctors are very concerned that her constant partying is ruining her health.  Doctors had told Rihanna to curb her partying in order to stay healthy on the road but their advice is not yet sinking in.

Rihanna was due to perform in the country’s capital city Stockholm but a doctor deemed her unfit to perform an hour before stage time, as she had a bad case of flu.
A statement from concert promoters Live Nation said: “Unfortunately, we need to report that the concert with Rihanna tonight at the Ericsson Globe [venue] has been cancelled due to illness.” “Rihanna is exhausted and sick.  Unfortunately we have once again been forced to make a difficult decision at the last minute.” The 23-year-old pop star was later transported from the hospital to her hotel, accompanied by two minders, wrapped in a big grey wool coat and looking withdrawn.On Monday Rihanna had to cancel another date in her ‘Loud Tour’ in Malmo after being hospitalised and placed on a drip. She posted a picture of the tube feeding into her arm on twitter with a caption reading “Sorry, Malmo!”

She also later released a statement to apologise to fans, which read: “I am sorry to everyone who was coming out to my show in Malmo, Sweden. I was so excited to perform for you all.”

“It would have been a great time … so much better than being sick with the flu, ugh! I’m really disappointed I couldn’t be there.”

The girl better stop before she drops.  Take the warning signs seriously Rihanna and slow down.