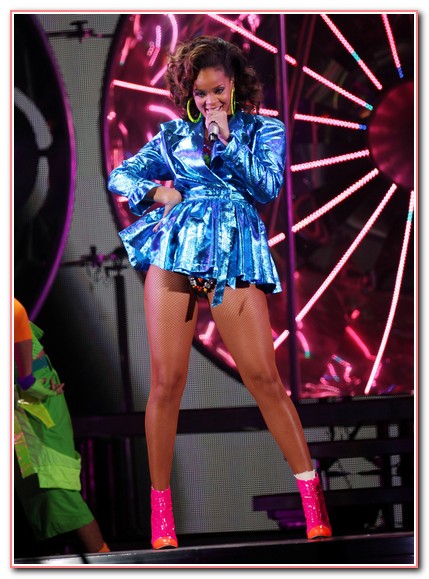 Rihanna has got to be looking for action all of the time and was caught on camera leaving one of Amsterdam’s most notorious cannabis cafes – the Bulldog coffee shop. This follows her escapade last Thursday – when the ‘S&M’ singer went on a shopping spree in one of Paris’ kinkiest sex shops – were even to mention what is for sale would be unlawful! Rihanna spent almost $2000 on kinky bedroom supplies including toys, leather handcuffs and underwear in the sex shop ‘Lovestore.’

The singer emerged from the Bulldog coffee shop yesterday afternoon, with a furry hat pulled down low and wearing shades – and she wasn’t standing too straight… .

Rihanna is on a role as last month she got into trouble for running topless through a farmer’s field during a video shoot in Northern Ireland – when Irish eyes aren’t smiling… .

Rihanna’s new single ‘We Found Love’ has of course caused controversy since it apparently glorifies casual sex and drug use. The accompanying video sees her puffing on cigarettes and inhaling smoke from the mouth of her on-screen lover.

Good old Rihanna will never be accused of being too conservative.