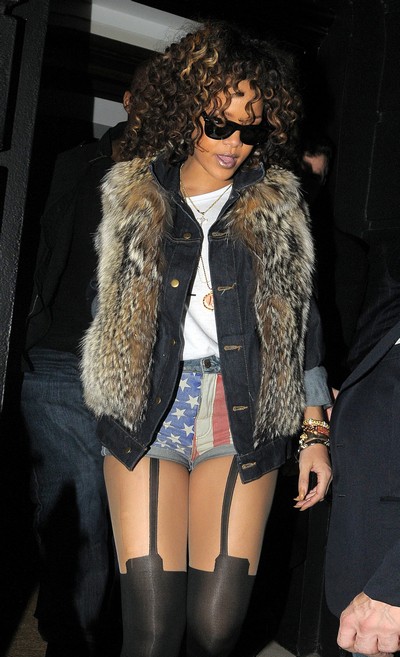 Rihanna almost had to cancel her concert in Ireland on Friday due to stress.   This indicates that the hard-partying superstar might be spinning out of control.   Rihanna broke down shortly before the show in Dublin and only managed to take the stage after a desperate phone call to her BFF Beyonce Knowles.

Her Loud Tour, which features over 100 dates, is clearly getting to Rihanna as recent hospitalizations, cancelled dates, and late starts to shows prove. Rihanna had to cancel two shows in Sweden a month ago, when she was hospitalized with what was reported as a bad case of flu. She was warned by doctors to curb her partying lifestyle.

A source told The Sun newspaper: “She’s just a young woman who just wants to have fun, but she was feeling pretty low.  It’s a mix of exhaustion and stress. She’s been partying hard to take her mind off things, but there are days when she wakes up and doesn’t even know where she is because of the travelling.  It’s no wonder she is feeling down.”

Beyonce took time out in 2009 so she could spend time with her husband, rapper Jay-Z, and understands the pressures of being on a long tour and dealing with stress, as she has been performing and since she was a teenager.

The source added: “She knows Rihanna needs downtime or she’ll burn out.”  After her performance on Friday, Rihanna wrote online: “I’m so light-headed!”

Rihanna has 16 dates left on her Loud Tour, which concludes on December 22 in London. Can she make it?