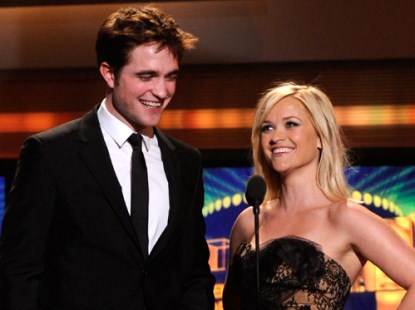 Reese Witherspoon made her first appearance as Mrs. Jim Toth at Sunday’s Academy of Country Music Awards in Las Vegas and the new bride was glowing.   And no wonder as she took the stage with heartthrob Rob Pattinson.

Showing off their chemistry, the duo joshed at the podium.  Witherspoon asked Pattinson, 24, what was his favorite part of Elephants’ Tennessee shoot. “I like drinking a lot of moonshine,” quipped Kristen Stewart’s man.  Earlier that day, the duo were in Santa Monica, Calif. doing a press junket for the period film, about a romance sparked on a traveling circus.

Witherspoon joked about locking lips with Pattinson for the flick. “What’s it like to kiss a tall guy?  I don’t know.  In the movies…they put you on a box and then you kiss the tall guy!”  The Oscar winner shows off more of her body in the film than she’s used to. “I sort of made it a conscious effort not to end up in a bathing suit in a movie, and here I was wearing a leotard for the majority of it!” she said.

“[The movie is] was from a different time when women loved their curves and enjoyed being voluptuous, so all the costumes I think are flattering for women in the film.”