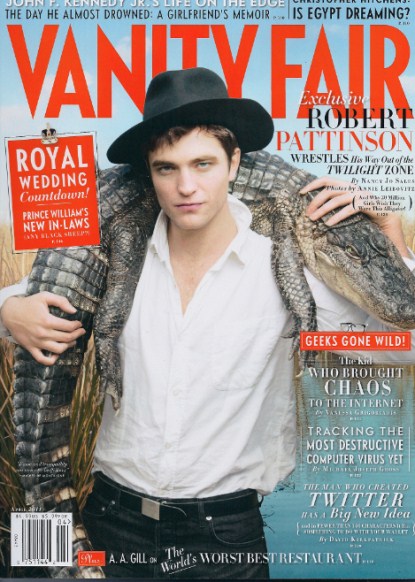 Sexy Twilight Saga star Robert Pattinson, 24,  has graced the pages of Vanity Fair numerous times in the past three years—and he’s has done it again with the April 2011 issue!  Robert gets super sexy down in Baton Rouge wearing a wide brimmed hat and a four foot Alligator around his shoulders!  Not sure if it is real but he is brave if it is!  The cover was shot but legendary  shot by Annie Leibovitz in Baton Rouge, Louisiana.

The caption is “Robert Pattinson wrestles his way out of the Twilight zone”.

Robert looks hot on the cover and my crush on him officially got bigger if possible.  I would love to be that alligator around his neck :-) but I would probably have to fight off crowds of twi-hards!

Meanwhile Vancouver has welcomed back the crew of Breaking Dawn.  Robert and Kristen Stewart arrived together, having been flown on the same private jet, but they were taken to their hotel in separate cars.  Kristen made a run for her SUV, through a crowd of paparazzi.  Citizens of Vancouver are excited to see them back and are hoping to catch a glimpse of them!