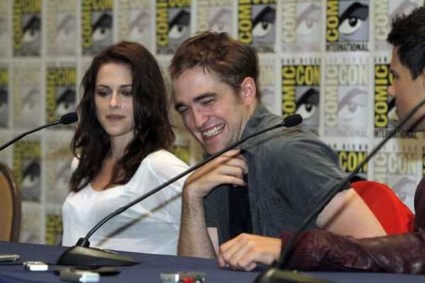 Watch out Twi-hards because Robert Pattinson has said the birthing scene in Breaking Dawn is brutal and graphic.  The birthing scene has Bella Swan giving birth to Edward Cullen’s daughter Renesmee.  If you have read the book you know the birthing in the book is pretty graphic and I was wondering how close to the book they would stay.

Robert Pattinson told the audience at Comic-Con: “The birth scene is so different from everything else in the movie. For a fantasy series it goes quite far. It’s hardcore, it’s graphic. There’s no other way to do it. It was fun.”   Kristen Stewart gave more details: “She’s literally choking on blood she’s been drinking, literally out of her mind. It was always in my head that she’s been able to fight harder than anyone because of that little bit in her, literally.”

“And at that part I got to play with having venom run through your veins and start to feel the hell that that is, and that’s after a moment of sheer exuberance of looking at your baby for the first time.“

From what Robert and Kristen are saying it seems like the scene will be pretty intense and will stay faithful to the book.  Is this making you more excited to see Breaking Dawn?  Keep stopping by to visit us, we will have all the Comic-Con news as it comes in!