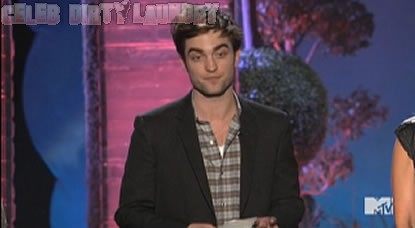 In honoring Reese Witherspoon for winning the Generation Award at the MTV Movie Awards last night, Robert Pattinson dropped the F-bomb on television!

During his speech, he recounted how Reese played his mother in his first movie, Vanity Fair. He said, “I don’t know if everyon knows, but I did my first movie with you…called Vanity Fair, and you played my mother. What I later learned though was that you were directly responsible for cutting my part of the movie out. This is the truth.”

He continued, “Seven years later, we worked together in a movie called Water For Elephants. And this time you played my lover. I didn’t cut you out…but I did f**k you.”

Afterward, he said, “Reese, working with you twice and not getting cut out once was such a special experience but if there’s one thing I’ll take with me. As you get older, it’s not always a bad thing to have sexual chemistry with your mother. Congratulations.”

Too funny!! What do you think of Rob’s tribute?