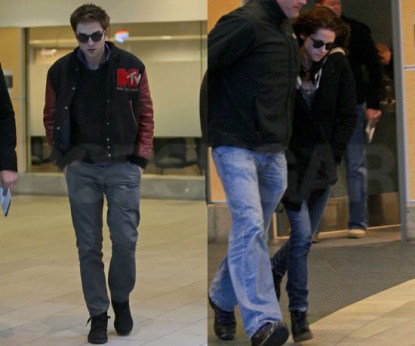 Filming of The Twilight Saga: Breaking Dawn has finally finished in Baton Rouge and the cast is now moving to Vancouver for the next phase of filming.  Yesterday Mackenzie Foy arrived in Vancouver the actress who plays Renesmee, Edward Cullen and Bella Swan’s daughter.  Today Robert Pattinson and Kristen Stewart arrived in Vancouver.

The couple was dressed casually with Robert wearing a MTV jacket.  Kristen kept herself hidden as they hurried to their waiting cars.  Kristen has an injured wrist no one is sure how it happen.  Maybe the injury happened  during the honeymoon scene ?

Meanwhile the sets are starting to be built in Vancouver we posted Bella Swan’s house where she lives with Charlie and then yesterday we posted the cottage where Edward and Bella live with Renesmee.  I am sure that now that Robert and Kristen have arrived in Vancouver we will have more news for you!   Are you excited?