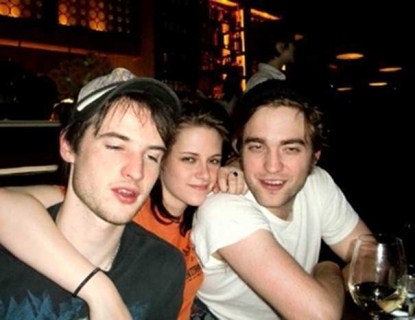 New pictures have surface from March 2010 of The Twilight Saga’s Robert Pattinson and Kirsten Stewart and in the pictures they are clearly drunk!  The pictures were taken when they were promoting “Remember Me” and Robert’s friend Tom Sturridge and two of his agents/managers are in the picture.  The group certainly looks like they are having fun.  I would not turn down a chance to party with them how about you?

Meanwhile since  the Twilight cast has landed in Vancouver and they have started to film the final scenes of Breaking Dawn excitement is building.  Not that they’re back filming in Vancouver chances are good Robert and Kristen will be dining out somewhere in downtown Vancouver and the residence are hoping to catch a glimpse of the couple.  One local restaurant in Vancouver said that after Robert and Kristen had eaten at his place said, “I’d get weekly letters from girls around North America, from little towns, asking to get the letter to Robert. I’d pass them on to the handlers.”