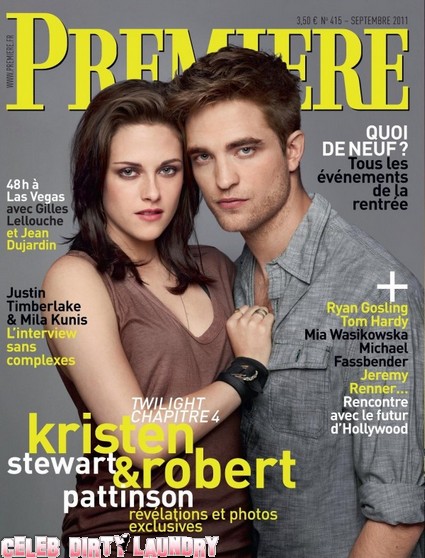 Twilight cuties Robert Pattinson and Kristen Stewart grace the cover of Premiere Magazine France.   In the magazine they have exclusive photos and tidbits about The Twilight Saga: Breaking Dawn.  They interview Robert and Kristen during the filming of Breaking Dawn.  In the interview Robert said he was surprised during the eight months of filming and how filming direction changed many times.  He said that a film of this magnitude never takes such a risk but for Breaking Dawn it paid off.

He also jokes about becoming an expert in ‘oral Caesarean’ (have your read the book he gives Bella a caesarean) and why he felt like the guinea pig in a weird experiment . Something David Cronenberg didn’t disapprove of.

Robert also gives multiple anecdotes and secrets and talks about how the end of filming The Twilight saga freed him. Rob talks about the most improbable scenes, the last day of filming and Kristen Stewart. Kristen was also interviewed by the magazine.  She also confirms the feeling of eeriness on set. ‘I sometimes felt like Bill Murray in Groundhog Day”