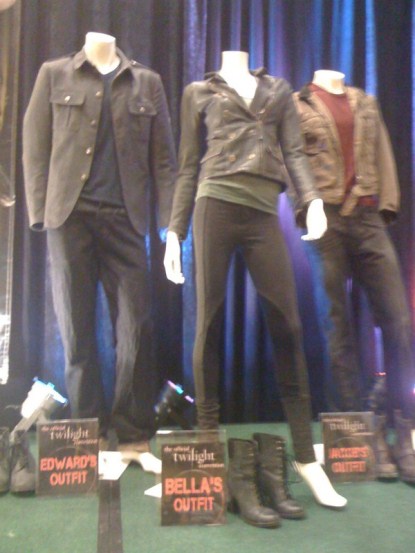 We got a nice Twilight – Breaking Dawn goodie today – YAY!  Hot off the set of Breaking Dawn costumes for Edward (Robert Pattinson),  Bella (Kristen Stewart) and Jacob (Taylor Lautner).  The photos are courtesy of  The Official Twilight Convention in Los Angeles, California.   The photos are still unofficial and have been uploaded by fans to various websites.  The covention visit many cities in the US and this is the first one where we have heard there have been Twilight costumes displayed.

Fans are already speculating that the unveiled pieces are fresh from the Vancouver set where they are now filming.   Breaking Dawn has been filming for the past few months in both Baton Rouge, Louisiana and has now moved to Vancouver, Canada.

The costumes that were not on display at the convention are the Bella Swan and Edward Cullen wedding clothes.  Everyone is uber excited to see Bella’s wedding dress.  I am sure pictures of the dress will be leaked soon and we will have them for you.  I love Bella’s outfit in the photo above especially the boots!  What do you think of these clothes?