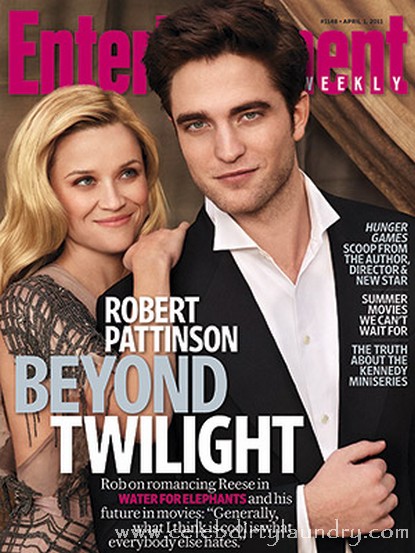 Robert Pattinson and Reese Witherspoon grace the current cover of Entertainment Weekly.   Reese  and hottie Robert are on the cover to  promote their new movie ‘Water For Elephants.’   In the movie Robert plays a traveling-circus veterinarian who falls for the show’s star attraction, played by Reese Witherspoon.   Robert sat down and talked to EW about what is next for him after he finishes filming Twilight.

“You can never really predict what an audience wants or how to maintain a career, other than doing what you think is cool.   But, Pattinson laughs,  generally, what I think is cool is what everyone else hates.”

Robert also dishes on what he won’t miss about Twilight – the contact lenses he has to wear to play Edward.

“My God, I’ll be glad to see the last of those.  I actually want to get some kind of plastic explosive. I want to reanimate them into something so I can kill them. It’s so embarrassing for me — after so many years, it’s still a process every single morning. Everybody else has figured out how to do it, and then there’s two people holding me down because I can’t do it myself.”

Water for Elephants will hit theatres April 22nd, 2011.  For more on the interview pick up a copy of the magazine.