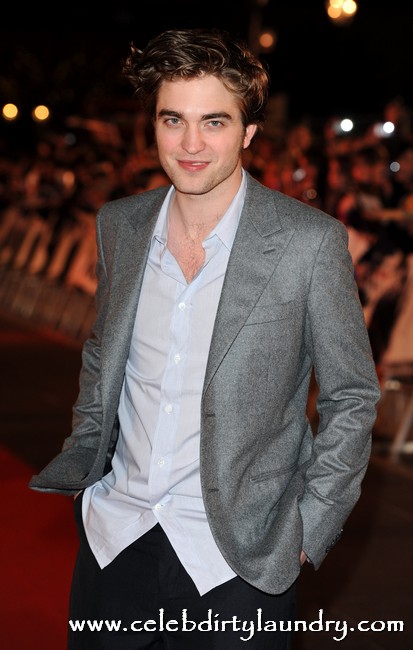 Are you a supporter of cute vampire Edward Cullen?  Well now is your chance to prove it.  Robert Pattinson is fuming over leaked Breaking Dawn photos that flooded the web last week (sorry, Twihards; they’ve since been taken down), and is calling on his army of fans to mobilize and bring down the hackers.

“It’s just ridiculous.  I literally can’t believe that it happened,” Pattinson, who presented an award at the Country Music Awards on Sunday night with Water for Elephants co-star Reese Witherspoon, told MTV.  “I want the Twilight troops to mobilize, all the good fans, and find out who these little s-s are and just hack into their computers and destroy them,” Pattinson told MTV with a laugh, before adding, “I’m being genuinely serious, Twilight fans, punish them.”

The photos, which first surfaced on Thursday and quickly blanketed Twilight fan sites and message boards, are racy images of what appear to be Edward and Bella on their honeymoon.  The leaked shots, several of which feature the couple in bed, have sparked debate over how far the studio is pushing its PG-13 rating.

“It’s raw footage.  It’s not even what people are going to see,” Pattinson fumed to MTV. “Why do this maliciously? You’re not a fan.  You’re just a dick.”  “I’d understand it more if they sold the stuff,” he continued. “But, it’s like, ‘Oh, you just want to be annoying?’ “

Pattinson isn’t the only one upset by the leak. Summit Entertainment, Twilight author Stephenie Meyer, Breaking Dawn director Bill Condon and producer Wyck Godfrey released a statement on Facebook that read: “As some of you may know, pictures and screen grabs of The Twilight Saga: Breaking Dawn as a work in progress have leaked on the Internet. We are extremely proud of this film and also extremely heartbroken to see it out there at this stage. The film and these images are not yet ready or in their proper context.  They were illegally obtained and their early dissemination is deeply upsetting to the actors, the filmmakers and Summit, who are working so hard to bring these movies to fruition to you in November 2011 and November 2012.”

The message continued, “Please, for those who are posting, stop.  And please, though the temptation is high, don’t view or pass on these images.  Wait for the film in its beautiful, finished entirety to thrill you.”

Problem is that in these times it is so very hard to keep information stored digitally secret – just look at WikiLeaks and Julian Assange.