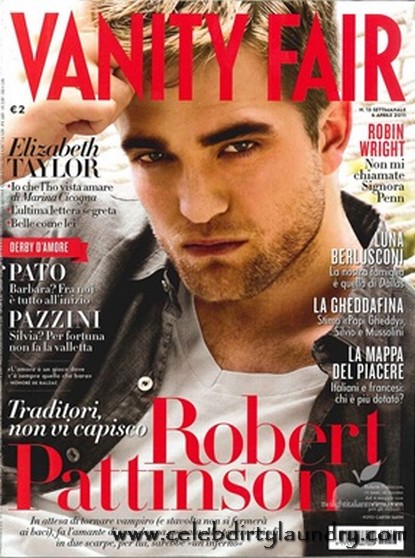 Robert on his dog:  He’s just bought a dog. He really wanted it. “I don’t know how I’ll handle it, but if you have to travel around the world, it’s good to have a mate. I took him from the animal shelter: I laugh if I think that he went from a shelter to a suite of the Four Season Hotel.” It’s not what happened to him. Well, almost.

Robert on music: Music was his passion, but he had to put it aside for now. “I play sometimes, but you have to be concentrated to do it seriously, and I do not have so much time right now.” I point out that many actors do both, he bursts out laughing “yeah, but look at the results. It’s embarassing”.

Robert on cheating: “Life is not black and white. There are married couples that never see each other. Is that marriage? But there’s a thing I’ve never got, that is why do people cheat? I can understand the impulse, but not how you can keep two relationship going at the same time for long. This usually happens to people with children, but I can’t really get why a non-commitment guy would choose to date four girls at the same time either. It must be hell, especially for men”.

Robert on till death do us part:  “My mother was 17 and my father was 25 when they met, they’re still together and look very happy. I’ve grown up believing that you can stay with the same person throughout your life.