Robert Pattinson Talks Thrusting in Front of his Parents! (Video) 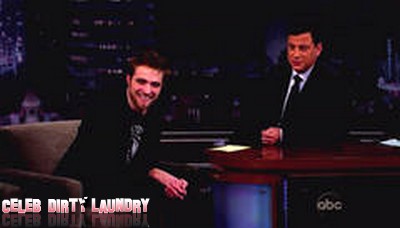 Last night while on Jimmy Kimmel promoting ‘Breaking Dawn’, Robert Pattinson talked thrusting, explicit sex scenes, and blamed Kristen Stewart for the film’s initial R-Rating! The star explained the mechanics of filming a PG-13 sex scene and why it was too graphic. He told Kimmel:

“It was going to be way more explicit at one point. I mean it should have been. It came down to a whole bunch of different factors. It was Rated-R for ages and they really had to fight to cut it down”.

When Kimmel inquired as to whether Pattinson fought for the scene to make it into the film. He revealed that it was Kristen Stewart who caused such controversy.

“It wasn’t actually me. It was Kristen who was causing it to be R-Rated. This was literally about the movement. It was kind of about thrusting. They kept telling you not to move”.

The interview was hilarious in itself but what made it even funnier was that Rob’s parents were in the audience!  Check out the video below and let us know what your think!  Sound out in the comments below!