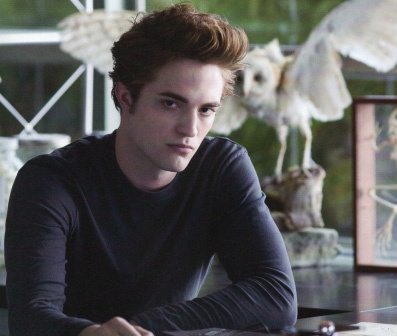 Robert Pattinson who plays Edward Cullen in the Twilight series is afraid that maybe the final two movies of the The Twilight Saga – Breaking Dawn 1 and 2 may get a “R” Rating.   Apparently the final two movies are horrific and the censor may think they are too extreme for teenagers.  I have read the books and if they film the birth scene of Renesmee the way it is described in the book I can see it being very gruesome.  Also the scenes of  Bella after the birth would be gruesome.

“There’s some interesting and weird stuff going on – really very, very, very strange. It’s great. For a big mainstream movie, it’s the most obscure storyline and really outside the box.   “It’s a horror movie. I’ve seen a few bits, and I just can’t see how it’s going to be (rated) Pg-13… unless they cut everything out,” Robert said.

If the movie gets a heavily censored “R” rating young fans will not be able to see it and that will not be good for the movie.  I wonder if they will tone down the scenes or will they end up on the cutting room floor?