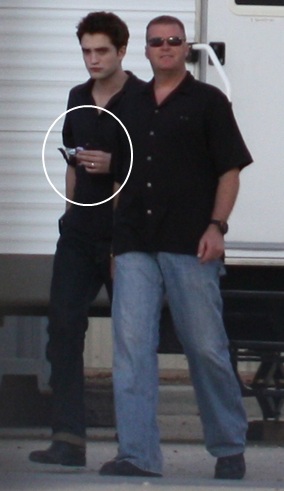 Finally some pictures from the set of The Twilight Saga: Breaking Dawn in Baton Rouge, Louisiana.    It looks like things are hopping on the set, these pictures were tweeted by @SaintsNurse directly from the set in Baton Rouge which is locked down.  In the pictures are Rob Pattinson (Edward Cullen), along with Kellan Lutz (Emmett Cullen), Twilight author Stephenie Meyer, and Peter Facinelli (Carlisle Cullen).

One exciting thing – notice Robert Pattinson is wearing a wedding ring so obviously they have filmed the wedding scene and are now filming scenes when Edward Cullen and Bella Swan are married and their married life.

Apparently most of the Louisiana filming will take place inside, at the studio. In February, the shoot is suppose to move to Vancouver, where, they have already started building the Bella Swan house.  Many of the exterior scenes are suppose to be filmed in Vancouver.