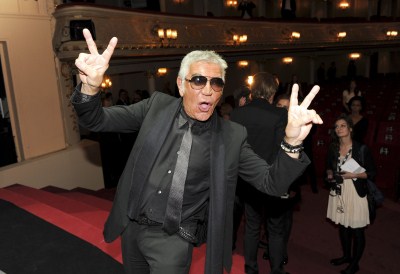 The 70-year-old cranky designer has recently opened a freestanding boutique in the trendy Aoyama area of Japan and said he chose the relatively quiet back street ahead of the busy shopping district of Ginza because he knows young people will come to him while their grandmothers and mothers will go to Chanel.

He said: “I want it to be that [shoppers] come to find me. They shouldn’t find me by accident walking in Ginza. I think this is a really winning strategy. I will demonstrate this to the dear Messrs. Chanel or other people like that. Fine, you dress the grandmothers and the mothers and I’ll dress their kids.”

“Even if I’m old, other people don’t know that. I make very young fashion.”

Roberto is so thrilled with his first store in Japan that he is considering opening a cafe or restaurant in Tokyo, similar to those he has in Milan, Florence and Dubai.

He told: “I like Japanese young people, so I want to be with them a little more often.”

Roberto Cavalli sounds like someone who is stuck on stupid – a typical sad old guy who worships the youth he once had and has lost.