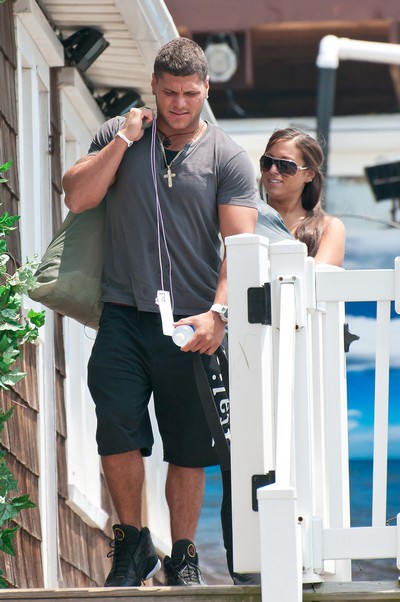 Ronnie Ortiz-Magro and Sammi Giancola leave the Jersey Shore house with the dirty laundry. Seaside Heights July 21st, 2011.  The on again off again couple were recently spotted in Atlanta.  They reportedly filmed a cameo for the upcoming comedy ‘The Three Stooges.’  Are you excited to see what these guys will bring to the movie or have you see enough of the Jersey Shore cast?

The 4th season of Jersey Shore premieres August 4th, 2011.  MTV recently released a preview that gives fans a look at what to expect for the coming season from Italy and how confused the Jersey Shore cast became while in Florence since they don’t speak Italian.  Check out the video below!  MTV released another trailer for season 4 today and And Ronnie and Sammi are back at it again too, showing a lot of PDA in an Italian club.

Will you be tuning into the new season of Jersey Shore? It might be worth it just to see Florence :-)

Click on the thumbnails below to enlarge 10 more pics of Ronnie and Sammi!