Rose on the Road – Comic Con, Hooters and More 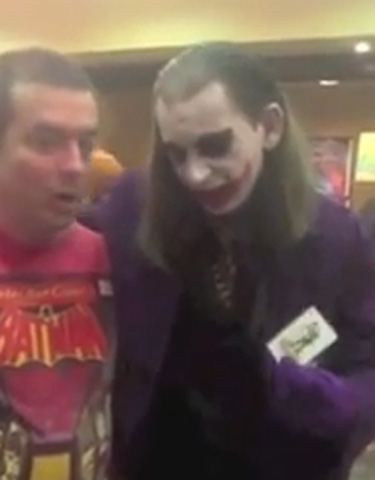 Famed Hollywood Reporter Shannon Rose, also known as “Mr. Hollywood” takes us on a weekend journey through Comic Con, bringing you some hilarious interviews with some of the world’s most revered superheroes from the comic books to movies; and getting to know them up close and personal.

Shannon takes you up close and personal in a fun filled interview with the world’s fearless demonologists “The Ghostbusters”; as they show off their powerful proton packs and the rest of their high tech ghost capturing gear.

You’ll meet a real life zombie and get under the makeup with Sonya Thompson who was cast in AMC’s “The Walking Dead”. She shows “Mr. Hollywood” how to play a perfect zombie and expunges the myths about these undead creatures like, do they really eat brains?

If you like tough women with guns, you’ll love meeting Scarlett from “GI Joe”. This cross bow wielding heroine fights side by side with the GI Joe platoon, going after the infamous Cobra operation to wipe them off the face of the earth. She discusses the possibility of a revived GI Joe cartoon and possible movie opportunities for GI Joe.

“Mr. Hollywood” runs into Gotham City’s most notorious villain “The Joker” who gives “Mr. Hollywood” his business card. Can you guess what it looks like?

Bob Camp, Co creator of “The Ren and Stimpy Show” talks with “Mr. Hollywood” about the controversial cartoon created in the mid 1990s that aired on Nickelodeon. He talks about his current projects and the future of the infamous cartoon, will it return to TV?

Then he speaks Debra Joseph editor for “What the Flux Comics”, which created the brand new hit Sci-Fi comic “Red Angel” starring Amy Vitale. You’ll get up close and personal with her as she talks about her favorite comics and other inspirations.

Then “Mr. Hollywood” takes you inside some of the best restaurants around including Hooters and talks with one of their world famous “Hooter’s Girls”.