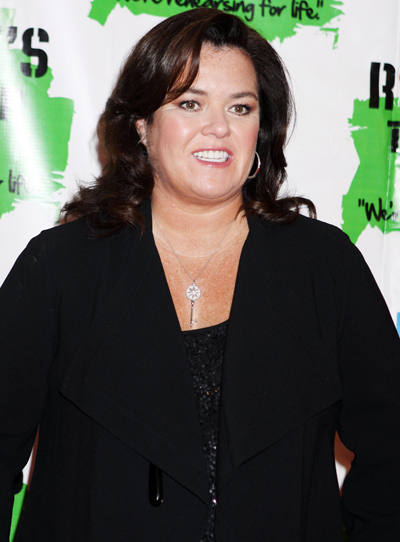 It looks like Rosie O’Donnell will have a lot to celebrate this holiday season! Not only is her show on the OWN Network going strong, but the comedian and talk show host recently announced her engagement to girlfriend Michelle Rounds!

According to RadarOnline, the couple will marry over the Christmas holidays (which shouldn’t come as a total shock, considering that Rosie joked back in October that she and Michelle were already thinking about “getting the wedding invitations printed.”)

“I walked into a Starbucks in the summer and she was holding a little puppy,” Rosie told ABC’s Nightline about meeting her fiancee only a few months before they got engaged. “I thought she was a 28-year-old heterosexual girl because that’s what she looked like to me.“

However, although Rosie’s so-called “gaydar” was off, she and Michelle, a 40-year-old New York-based businesswoman, started dating shortly after that, a shock to Michelle’s parents who did not realize their daughter was a lesbian.

Still, while Michelle’s parents may have their reservations about their daughter’s relationship, it looks like Rosie’s family, including ex-girlfriend Kelli Carpenter and their four adopted kids, have reportedly all given the union a thumbs-up!

“Kelli told me the kids have met and like Michelle,” said Rosie’s former mother-in-law Melanie Safer.

“We’ll all be together in New York with the kids for Thanksgiving and Christmas,” Melanie said. “It’s all positive and it seems like they’re doing well. The kids are happy and adjusting really well.”

Congrats to the happy couple. It’s not easy creating a blended family, but it seems like the ladies are off to a strong start!