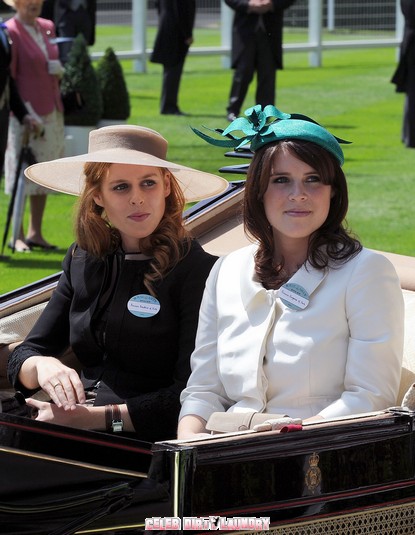 Chris Colfer, a big star on ‘Glee’ happens to have met Princesses Beatrice and Eugenie along with Prince Harry at London’s Hard Rock Calling festival.  His gay character Kurt is obsessed by the Royal Family and Chris, 21, is pestering producers to write the sisters a slot in the musical comedy, whose cast recorded a version of Journey hit Don’t Stop Believin’ for series one.

Chris said after meeting them backstage on Friday: “The princesses love Glee.”  “We’ve got the royal seal of approval. Maybe we can get them a cameo on the show. Wouldn’t that be amazing?”

The rest of the Glee cast, including Matthew Morrison, joined the royal group and Kurt by the side of the stage to watch The Killers at the three-day Hyde Park festival, hosted by Absolute Radio.

An onlooker said the princess, 22, and 21-year-old Eugenie arrived in a buggy.  The witness added: “They look a bit bedraggled from all the rain but they soon perked up after they saw Kurt was there.  Eugenie especially is a huge fan of Glee and everyone got on like a house on fire. It was a real party atmosphere. Eugenie was pressing Chris for more information on the third series of Glee, which has been filmed but not aired over here yet.”

Gossip Girl star Chace Crawford was also in the gang. The pack of celebs later went back to the festival bar for an evening of drinks.  The witness said: “Harry really got the party going. A lot of tequila was about.”

Its so nice to see that the royals are happy to party with common TV stars.