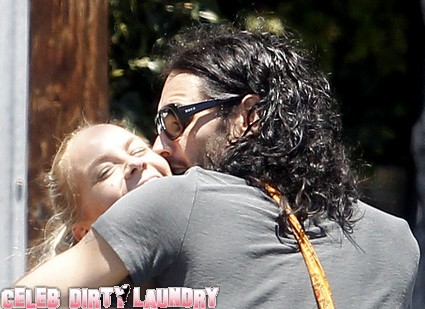 You know what they say ‘When the cats away, the mouse will play’!  Well Katy Perry is traveling on her world tour and as you can see from the photo about hubby Russell Brand seems to be having a lot of fun.   The women in the pictures who he is affectionately hugging and kissing is Sadie Turner.

The pictures were taken at the Red Rock Bar & Eatery in West Hollywood, California and they are fueling the recent rumors about Russell Brand’s infidelity and his unusually close relationship with Sadie. Sadie is said to be his longtime friend and fellow rehabbing former addict.

These pictures show Russell and Sadie acting suspiciously close, with Sadie pointing out Russell’s pants being unzipped and later, receiving a loving embrace and a kiss from the comic actor and allegedly retired lothario.   What do you think?  Where there is smoke there is fire or is this much ado about nothing?  Let us know in the comments below!