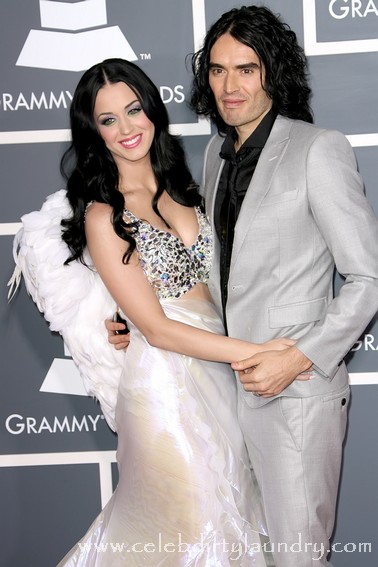 Russel Brand who has said he is a sex addict has complained his sex life has diminished since marrying Katy Perry five months ago.  At one time he use to bed five women a day but Katy has managed to calm him down.   When asked if he would be faithful to Katy he said he was taking it one day at a time.  Russell denied rumors that he and Katy are already in therapy.

“It’s difficult getting used to one person and being in the same house every day.   See, if she leaves stuff lying around I have to deal with it.  And if I leave stuff on the floor I have to pick it up. That confuses me.  And she takes ages to get ready. It’s unbelievable. I had no idea what went on, I was never normally around for that bit.”

Russell also said he has never been in love before and if you love someone you can change for them.   He has also said he and Katy would love to have children.  Call me cynical but I would say the hope of their marriage lasting is about the same as a snowball’s chance in hell.  Russell is a womanizer and it is only a matter of time before he reverts back to his old ways.  Celeb Dirty Laundry wants to know – what do you think?  Can Russell stay faithful to Katy?  Or is she destined to have her heart broken?