Russell Brand Sits Down With Ellen Degeneres – And Defends His Marriage 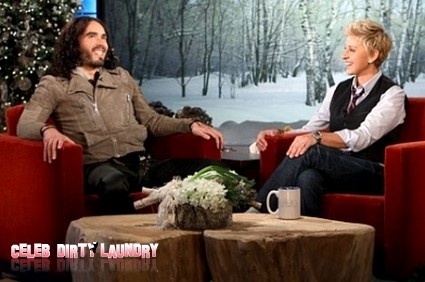 Russell Brand sat down on the Ellen Degeneres show today and naturally, the rumors surrounding his marriage to Katy Perry were addressed.  There’s been much speculation that the two, who were married in India in 2010, were on the outs and heading for a divorce (to be fair, it would coincide perfectly with all the recent celebrity couples heading for the big ‘D’).

Have no fear, because according to Russell, he and Katy are happily married.  Russell had this to say on Ellen:  “I’ve treated the whole internet now like it’s a wicked little liar.  Yeah, I am really happily married.”

“There are always rumors, aren’t there?  In the end you have to just not engage with the Internet technology, which is difficult because a lot of the nude women websites I quite enjoy.”

Always the comedian Russell.  Both he and Katy, 27, have been adamant about the strength of their marriage, with Katy often taking to twitter to defend their union.  So how do these rumors get started?  I guess time will tell as to whether these two are as strong as they say they are – for their sake, I hope they can stick it out.