Sandra Bullock Collapses Emotionally As She Loses In Love Again 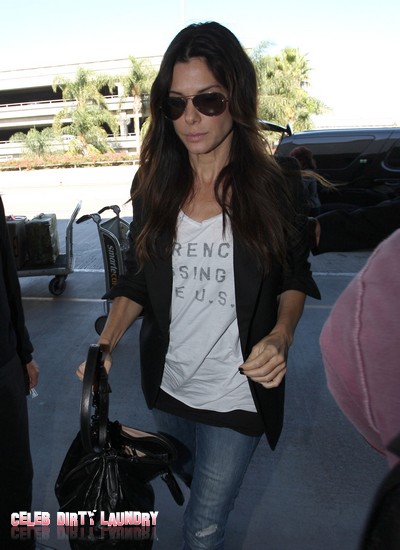 Sandra Bullock has suffered a devastating but completely understandable emotional breakdown after losing Ryan Reynolds to Blake Lively. Apparently Sandra was so hurt by Ryan’s choice that she has become paralyzed with depression – and was forced to turn down a starring role as Clint Eastwood‘s daughter in his new film Trouble with the Curve.

Sandra was already living in an emotionally fragile zone since her bitter 2010 divorce form serial cheater Jesse James. Having Ryan opt to chase after 24 year-old Blake rather than stay and settle down with her has completely put poor Sandra off the road. Ryan is 12 years younger than Sandra and although he wouldn’t quite qualify as a boy toy there is still a rather unnatural age difference between them. As we have seen in Hollywood recently, Demi Moore and Ashton Kutcher come immediately to mind, these age-inappropriate romances tend to end in heartache – for the older party anyway.

Sandra may have dreamed that she and her adopted son Louis, who is almost 2 years old, would settle down to a life of family harmony and martial bliss with Ryan but he had other ideas… .

The National Enquirer reports inside info on the situation:  “I think Sandy has been reeling over the news that Ryan is moving on with Blake,” an insider divulged.  At one point, I’m sure she thought maybe she and Ryan had a chance at love and started looking at him as potential husband material.”

“Sandra loved married life and never dreamed she’d be divorced. But after she learned of Jesse’s cheating, she knew she had to leave because she deserves better.  As she was healing from the pain of her divorce, Ryan was right there for her and little Louis,” the source continued.  They’d spend hours on the phone, share quiet dinners at home and go off weekends camping or enjoy movie marathons with Louis.  Ryan makes her laugh, and before long, Sandra was laughing her tears away.”

We hope that Sandra’s tears are not back to stay. She needs to find someone her own age who shares her interests and desire for a settled lifestyle – and leave the cowboys alone.