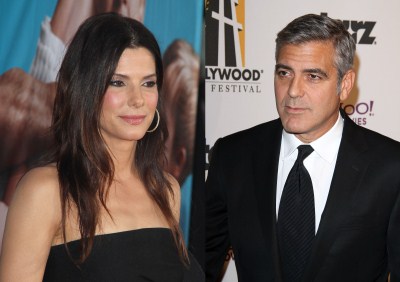 George Clooney and Sandra Bullock are the only actors in their new film, ‘Gravity,’ which appears to be a ‘Major Tom’ style saga.

The pair star alongside one another in sci-fi drama ‘Gravity’ which is directed and co-written by Alfonso Cuaron. The film sees them portray two astronauts working on a space station together – George finds it odd that they don’t have any other co-stars.

George said: “A satellite blows up and space junk causes damage. We go out in space suits, and she and I are tethered together, floating through space.”

“It’s a two-hander with only two actors in the whole film. It is a very odd film, really. Two people in space. No monsters. It’s more like 2001 than an action film.”

The star admitted while he was thrilled to be working alongside Sandra – who he has been friends with for 20 years – he is less than impressed with the movie being shot in 3-D.

George added in an interview with USA Today: “Sandy is the lead. And she is beautiful in it. We have known each for way over 20 years. It’s fun to work with her.”

“It is the first time I’ve been in 3-D and, hopefully, the last time. It’s not near ready yet. They just showed the first cut to the studio. “

Is George Clooney too old to rock and roll? What’s this bashing of 3-D technology? James Cameron says it’s the future of Hollywood – the near future too.